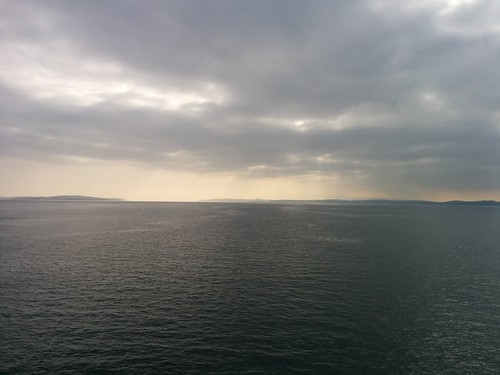 Our second visit to Bute was undertaken by Dean, Fiona, Alison and myself and after a long but pleasant journey (in which we were shamefully hoisted on our own service station prejudices) we found ourselves sheltering from the wind inside the Rothesay Ferry, watching the coast of Bute getting closer and growing more distinct.

We met Paul shortly after checking into our hotel and were given a whilste-stop tour of the island encompassing the site of the old and new creamery (now the Sheese factory), an abandoned and now derelict Ambrismore Farm, a beautiful viewing platform across Scalpsie Bay, at the south end of the island as well as crossing that mystical point where the lowlands and the highlands meet. We heard about viking kings, irish settlers, farmers, stewards, stewarts & stuarts. There was someone called Thom who created cuts to funnel water across the island to power his mill (cheaper than shipping in coal from the mainland). There was E.E.C. subsidies, loans, and repayments, milk and milk sheds old and older. There was architecture of every kind, iron works as advertising, a salt water swimming pool and a little piece of England re-created along the coast to calm the homesick. This was all before tea which was taken in a local hostelry which gaily advertised it’s Pie Night only to inform us upon arrival that no pies remained (it transpired that there was actually one vegetarian pie left). Happily other victuals abounded and once Paul rejoined us we were able to discuss and plan the following days workshop.

The workshop itself took place in the cafe of the Rothesay Libary and was a very successful and productive event. After introductions we started by addressing some of the concerned participants had about the project and their understanding of it. The word “hazy” had been bandied liberally around and we tried to negotiate our way around it with without going further than we felt was appropriate at this stage. Personally I felt like our ability to talk about the project improves with each attempt and it certainly seemed like our current take on “what’s going on” seemed to meet with some approval from the delegates present. 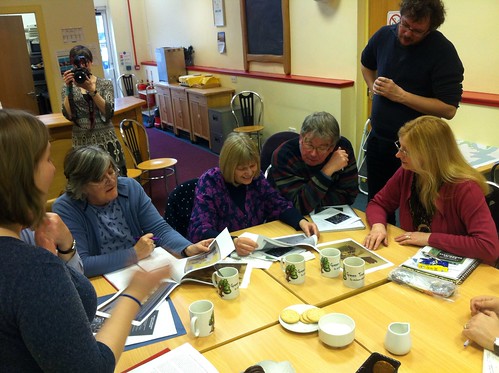 There were still some thistly issues to be addressed and the thistliest of these is currently the nature and extent of the access participants will be able to get particularly to the BBC archive. Fiona was able to update us all on this subject as well as suggesting a host of alternative sources of information which was gratefully received and which it was interesting to see the group hadn’t already been aware of. Alison also stepped in with some wonderful prepared leaflets giving participants a taste of some of the Science Museum’s collection which caused a great deal of excitement and discussion.

After lunch we progressed into exercises which aimed to discover, and start to document, the subject areas which participants were looking into and map these manually onto a timeline and a map of Bute we’d brought with us. The point of these exercises was to introduce the idea of connections across stories which could be surfaced through contextual information. This is one of the key areas where we feel a digital approach could add value to the stories themselves and the process of storytelling and so bringing this type of idea in at this stage seemed a valuable thing to do. There is clearly a wealth of knowledge and enthusiasm within the group which was a huge pleasure to witness. The breadth of interest and the range of subject areas means there is certainly no lack of interesting stories waiting to be told and being able to help the participants to tell those stories is a very exciting prospect. The whole team left with a strong sense of the potential there is to create something very exiting with the people involved.

We finished the trip with a visit to the purpose-built Bute Museum next door to the library in the company of Museum Curator, Anne Speirs. The museum houses a wealth of local historical objects including the ‘hostage stone’, a carving (apparently done by a viking child) which is shortly to be taken to Denmark on loan. After that we passed the Haste Ye Back sign at the ferry terminal and were soon back on the main land and homeward bound.